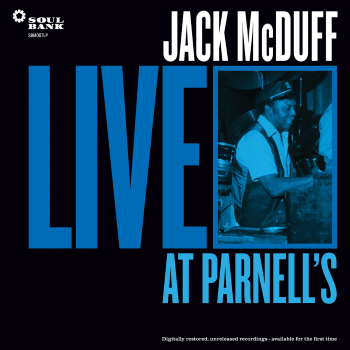 Fans of that very special, organ-led soul-jazz sound will be delighted to learn that SOUL BANK MUSIC have just released a live double album from Hammond maestro, BROTHER JACK McDUFF.

McDuff who died in 2001 is generally regarded as second only to Jimmy Smith in terms of fame and the impact he made with the Hammond B-3 Organ and this new live set finds him at the top of his game.

The 15 track double CD, ‘Live At Parnell’s’ is made up tunes selected from a week-long engagement he played at the famous Seattle  jazz club in June 1982. The band for the shows consisted of Danny Wollinski on sax, Henry Johnson on guitar and Garrick Kings on drums and McDuff leads them though a varied repertoire. There’s funky, gritty blues like ‘Walkin’ The Dog’(not the Rufus Thomas tune, by the way), fusion workouts like ‘Make It Good’ and, as you’d expect a good smattering of standards like ‘Satin Doll’ and ‘A Night In Tunisia’.  There’s also a swinging version of Bacharach’s ‘Wives And Lovers’ which is the better for lacking the sexist lyrics!

The fact that we have this recording is intriguing. Soul Bank’s Greg Boraman first heard the music on a battered C60 cassette some years ago. It seems the recording had been made at the club by Hammond enthusiast and friend of MacDuff’s, Scott Hawthorn but the quality wasn’t that good. Undeterred, Boraman had the tape restored at the wonderfully named Dr Mix studio. In fairness, even the Soul Bank people admit, the remastering has left remnants of the original tape’s imperfections, and occasional touches of the buzz that came from McDuff’s infamous torn Leslie speaker. However only the most cynical critic would say the end results were not worth the considerable effort and they only add to the atmosphere!

JACK McDUFF – Live at Parnell’s – out now via SOUL BANK.