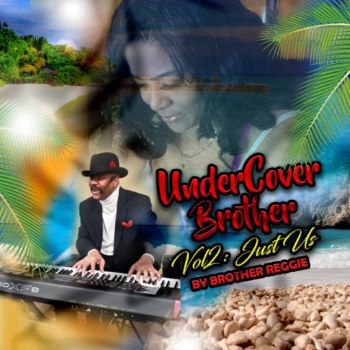 BROTHER REGGIE is the performing alias of Washington DC-based Reginald Van Carreker. He’s a music multi-tasker – plays numerous instruments, sings, writes, arranges and produces. He’s also ambitious and a hard worker! You see our Reg aims to deliver what he calls “a 10-volume masterworks music series” with one album to be released each year until completed! The aim behind this ambitious project is to introduce old school soul to a younger generation of listeners as well as who he calls “grown folks who may have never heard the classic songs many of us have come to know and love!”. Reggie therefore calls himself “the Brother under the cover songs”.

Last year he released the first volume in his ten-album series ‘Under Cover Brother Vol. 1: Just Me’. It slipped under our radar, but we’ve now discovered the imaginatively titled ‘Under Cover Brother Vol 2’. The ten tracker is (as the title suggests) a set of covers. Best known reworks are versions of EWF’s ‘That’s The Way of the World’ and LTD’s ‘Love Ballad’. Reggie, we’re told, is a big fan of EWF while he’s worked several times with Jeffrey Osborne. These new versions are sufficiently different to offer interest as Reggie (his words) “provides the song’s “essence” with twist to kick it up a bit and  “flipping the script” on an r&b song by “jazzing” it with a lead guitar or keyboard solo.”

Reggie’s vocals are different too. Old school, for sure but gruff and world-weary offering counterpoint to the generally smooth arrangements. The album’s out now