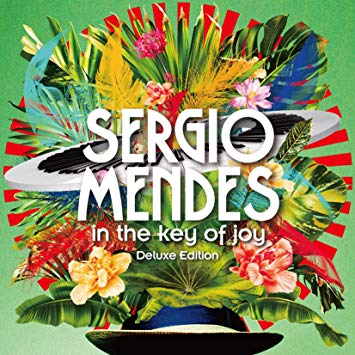 Brazilian music legend SERGIO MENDES is all set to release a brand new album….. ‘In The Key Of Joy’. The new collection is Mendes’ first in five years and it’s been timed to tie in with a new documentary movie (of the same name). The film chronicles Mendes’ ground-breaking life and career and has been put together by acclaimed filmmaker John Scheinfeld. It was previewed to acclaim at the Santa Barbara International Film Festival and will go on general release this Spring.

The ‘In The Key Of Joy’ album will be available from February 28th and guests on the album include rapper Common, Hermeto Pascoal, Joe Pizzulo, Cali y El Dandee, Buddy, Sugar Joans, João Donato, Sheléa and Mendes’ wife and long-time singer of choice, Gracinha Leporace. Between them they mix a joyous, optimistic cocktail that melds classic Brazilian music and moods with contemporary soul, jazz and pop sounds and flavours…. exactly the same recipe Sergio used back in the heady days of Brazil ’66 and has used ever since!

That intoxicating sound is upfront from the start with ‘Sabor Do Rio’ which features rhyming from Common. There’s more tricky rapping on the album title track; this time courtesy of Buddy (an up-and-coming Compton rapper and Robert Glasper collaborator). ‘Catch The Wave’, ‘Romance In Copacabana’ and ‘Samba In Heaven’ are maybe a wee bit more “traditional” while the big ballad moment is ‘Love Came Between Us’ which features vocals from Joe Pizzulo, who took lead on one of Mendes’ previous biggest hits, ‘Never Gonna Let You Go’.

That very song is one of the many highlights on Disc 2 of the de luxe edition of ‘In The Key Of Joy’. This disc offers a 16 track retrospective of the very best of Mendes’ back catalogue and , of course, features things like ‘Mas Que Nada’ ( which, did you know, means a sarcastic “yeah right!”), ‘Pais Tropical’, ‘Constant Rain’, the Will. I. Am collaborative version of ‘Agua De Beber’ and definitive easy listening versions of ‘Going Out Of My Head’ and ‘The Look Of Love’?