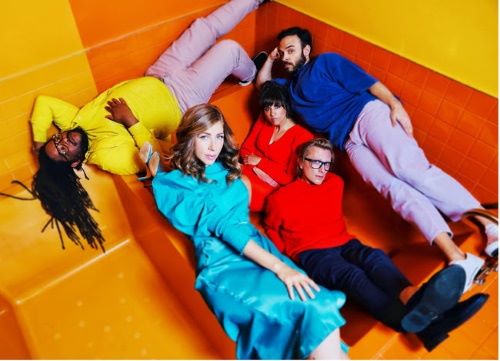 To our shame we’ve never really come across East coast-based band LAKE STREET DIVE till now. Maybe that’s because they’re not a soul band per se. Indeed, when they started back in 2004 they described themselves as a ”free country band”. But band member Mike Olson tells us that they didn’t sound that good in that mode and so they developed a cross genre feel – a sort of cocktail of sunshine pop, soul and jazz and a few other things depending on the particular mood at any given time. And that recipe seems to have worked. Over the years the band have  picked up a large and growing fan base who love their fresh and innovative sound. That freshness and their lack of pretension can be seen on their cover of the Jackson 5’s ‘I Want You Back’ – the video for which has been viewed 6 million times on YOUTUBE! – and their takes on the Beatles’ repertoire, like their ‘Don’t Make Me Hold Your Hand’.

Right now, Lake Street Dive are gearing up to release a new album, ‘Obviously’ which is due March 12th on Nonesuch Records and as a taster they’ve just issued the single ‘Hypotheticals’. Like the rest of the album, ‘Hypotheticals’ was produced by Mike Elizondo whose credits include work with Dr. Dre, Eminem and 50 Cent and his R&B credentials can be plainly heard on the track which has a definite soul vibe. For sure more Hall and Oates than the good Doctor – but the groove is definitely there.

‘Hush Money’,the album’s second track, has a funkier soul undertow. Elsewhere the album offers all kinds of other flavours – in keeping with the band’s lack of pigeon-holing. ‘Being a Woman’ is one of several highlights – a finger-snapping, treatise on gender inequality while ‘Nobody’s Stopping You Now’ is a letter of encouragement from lead vocalist Rachael Price to her teenaged self, co-written with bassist Bridget Kearney. Outstanding too is ‘Same Old News’ – the album’s most soulful outing. This is a homage to those classic Donny Hathaway/Roberta Flack duets with Rachael Price and Akie Bermiss harmonizing beautifully. There’s a different kind of harmony on the album closer, ‘Sarah’ Here the obvious reference point is Brian Wilson, though the song itself has a country feel. Then there’s ‘Nobody s Stopping You’ which boasts a very Carole King/Laurel Canyon vibe.

‘Obviously’ is a varied, satisfying and grown-up album. The band explain that the LP title is taken form the first word of the opening track – ‘Hypotheticals’. By using it, they are declaring that they are back… obviously!