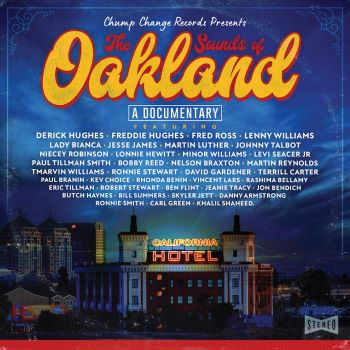 Good ‘ole Donald Trump has provoked many people and still does but maybe he doesn’t know that one of his bizarre comments created a whole soul music album. We can’t  remember the exact date but big Don twice exclaimed on TV that Oakland was “the worst city in America”!

The comments angered all sorts of people. The city fathers for sure and all the decent people who live and work there including  soul/jazz drummer and record producer Paul Tillman Smith. Trump’s comments prompted Paul to put together a whole album to highlight the best of the city’s current music talent. He said : “Oakland has been a creative hotbed for beautiful, original music for decades” and with the help of people like Norman Connors, long time Prince-sideman Levi Seacer Jr., and Michael Bolton and Braxton Brothers bassist Nelson Braxton he set out to prove his assertion.

The album, ‘The Sounds Of Oakland’ which was co-funded by two California non-profit organizations, the Bay Area Jazz Society and the West Coast Blues Society was released last year and is now being promoted for the UK and European markets.

The album features a who’s who of Oakland musicians, including Freddie Hughes (who sadly died in January)  and his son Derrick. Derrick is out front on one of the LP’s highlights, the proper old school ‘Bright Lights’ . Derrick is also featured on a new version of his father’s 1968 ‘ Send My Baby Back’ – like all good covers, it’s very different to the much-loved original. The album’s focus single is the sweet, old schooler, ‘Country Flower’ which features Martin Luther.

Soul connoisseurs would, I’m sure, like to know that Lenny Williams features on the album too . He fronts the lovely ‘Invisible Man – a tune he’s worked on  before but this new take (at least I think it’s new … the start certainly is) is just as sweet and lovely as the original. Lenny, of course, was an early mainstay of Tower Of Power, and though the band aren’t featured, there are plenty of cuts that might remind you of their sound… they are from Oakland, after all!

There’s plenty of soul/blues on the set too alongside some dirty funk, all adding to Tillman-Smith’s assertion that Oakland has a lot to offer. The album’s out now via the wonderfully named  Chump Change Records