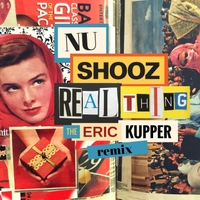 Portland band NU SHOOZ (essentially the husband and wife team Valerie Day and John Smith) made a comeback of sorts last summer with their album, ‘Bag Town’. It proved that there was more to the band that big, big 1986 hit ‘I Can’ Wait’.

One of the key cuts on the long player was the ‘Papa Was A Rollin’ Stone’-sampled ‘Real Thing’. Well the tune has just been issued as a single that comes complete with a remix from ERIC KUPPER.

Soul and dance connoisseurs will know that Mr K’s been in the biz since the mid 80s, producing and remixing everyone from Alicia Keys to Depeche Mode (who?). His tweak on ‘Real Thing’ keeps the Temptations flavour and the lovely vibes but adds a house-influenced throb. Eric says of the cut: “It was such a pleasure to remix this awesome song…created by a band I’ve greatly admired for so long; it is a real honor for me to be involved in this project.”