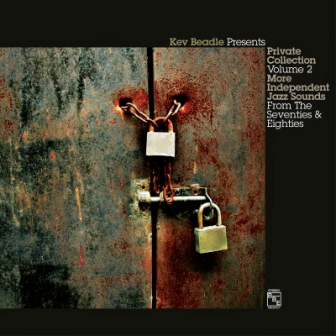 KEV BEADLE is a veteran UK soul and jazz scene veteran. Beadle cut his music teeth on the Soho jazz-dance circuit at clubs like the Horseshoe and The Wag, where he eventually became the resident DJ. He’s also worked the decks at The Belvedere in Richmond and at the legendary Dingwalls where he played out alongside people like Bob Jones and Gilles Peterson.

Record-wise, he’s compiled dozens of albums, working the back catalogues of labels like Chess/Cadet and Blue Note. Most famously though he worked on retrospectives on Terry Callier, doing much to revitalise the career of the gentle soul-folk troubadour.

Kev’s latest compilation is called ‘Private Collection Volume 2’ and it’s out now on bbe Records. The set’s sub-title sums up exactly what it is – “Independent jazz sounds from the seventies and eighties“. Amongst the featured music there’s Archie Shepp’s ‘Song For Mozambique’, Chico Freeman’s Wilpan’s Walk’, Seawind’s ‘He Loves You’ and ‘Autumn Song’ from Appendix.

Many of these tracks are new to CD and the sleeve notes describe how the music illustrates the changes that took jazz from hard-bop and Latin to modal, spiritual and “cosmic” jazz”.

Beadle sums up his album: “It’s an uncompromising collection, making accessible music that has never really received the truly wide audience it deserves, highlighting a range of artists representing yet another chapter in Black America’s fascinating musical history”.

PRIVATE COLLECTION VOLUME 2 is out now on bbe Records