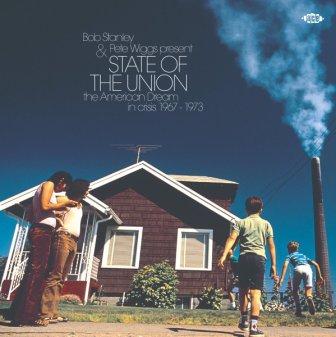 60s and 70s collectors will be hugely interested in two new releases from ever-reliable Ace Records. First, there’s another compilation put together by St Etienne musicians Bob Stanley and Pete Wiggs. Both are self-confessed crate diggers and over the years the pair have complied a series of intriguing collections based around specific “non-musical” themes. Their latest offering is a 24 track ‘STATE OF THE UNION’ which purports to show how established artists tried to cope with and react to what appeared to be the destruction of the old, comfortable American way of life.

The two music archaeologists take 1968 as their starting point. It was, of course, a year that was scarred by the assassinations of Martin Luther King and Bobby Kennedy; a year that saw growing and active opposition to the Vietnam War; a year that witnessed race riots, rising unemployment, urban violence, rural poverty and, interestingly a growing divorce rate. All that and more challenged the cosy way of life that middle class America had smugly enjoyed for a long time. And ‘State Of The Union’ sets out to show how the mainstream American record industry reacted. Yes, for sure indie, left field, rock and experimental soul, jazz and funk artists erupted with anger and questioning, but here we can hear how people like Frank Sinatra, Elvis Presley, Dean Martin, Roy Orbison and the Beach Boys reacted. The only “soul” contributions come from Della Reese (her version of Al Kooper’s ‘Brand New Day’)and Eugene McDaniel’s (‘Cherrystones’) but for real intrigue try cute pop star Teresa Brewer’s version of Gil Scott-Heron’s ‘Save The Children’ or a harmonic rendition of the Beatles’ ‘Revolution’ from the Brothers Four. This collection offers plenty more of the same intrigue and I challenge you to find another album where the 4 Seasons are lined up with Bing Crosby or where Dion sits cheek by jowl with Buddy Greco.

Ace’s second new release is a little less challenging but none the less interesting…. ‘Come And Stay With Me’ is a 22 track collection of MARIANNE FAITHFULL’S 60s recordings. If you were around in the 60s or indeed have some knowledge of that golden age, you’ll know all about Ms Faithfull…. the convent school girl rocketed to fame via her liaison with the Rolling Stones and given her notoriety and her perfect 60s image, it’s surprising to learn that this 24 retrospective is the first decent collection of her 60s output for a long time. All the hits are here, of course, and things like ‘As Tears Go By’ remain classic 60s artefacts and over the compilation’s time span (’64-’69) you can hear a sort of evolution towards “serious artist” status which is what she is regarded as today.