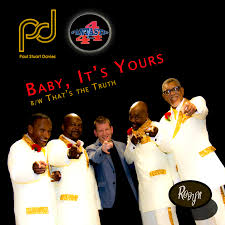 PAUL STUART DAVIES is a young British singer with a passion for vintage Northern soul. Earlier this year he fronted a band called The Northern Soul Survivors on a revival of ‘Do I Love You Indeed I Do’ (the rest of the band, by the way, were Tommy Hunt, Dean Parrish, Sidney Barnes, Pat Lewis and Chris Clark!). Then under his own name, Paul issued ‘Tomorrow’s Love’ – a song he recorded in Detroit with a couple of original Vandellas, soulstress Pat Lewis, Northern icon Tobi Legend and the great Kim Weston!

For his latest single Paul has enlisted more soul legends to assist. The backing vocals on Paul’s ‘Baby, It’s Yours’ are supplied by the current line-up of the Fantastic Four and between them they brew up a proper, authentic sounding Northern storm. The B side is the equally pleasing ‘That’s The Truth’ –which might remind Northern veterans of The Marvellettes’ ‘I’ll Keep Holding On’ . (Paul and The Four are pictured on the sleeve, above and below)

The two songs are available on 7″ vinyl and need investigating by anyone who really cares about Northern soul… they’re as authentic as anything you’re likely to get right now. Find out more @ www.paulstuartdavies.co.uk