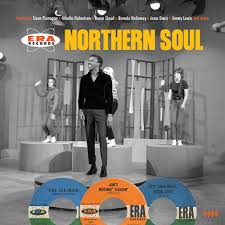 ERA RECORDS was a Los Angeles label founded in the late fifties by music biz hustler, HERB NEWMAN. Herb was a pop man through and through but he was also aware of the popularity and potential of soul and as the 60s progressed he recorded more and more records in the soul idiom. Ace/Kent have rounded up two dozen of them and just put ’em out on CD under the banner ‘Era Northern Soul’ – the logic being that many of the sides here (like Steve Flanagan’s ‘I’ve Arrived’) have been big on the scene and those that weren’t surely would have been had they been available.

The ‘Northern’ tag though is a little misleading since not all the selections fit the Northern stereotype. Othello Robertson’s ‘Come On Home’, for instance, is a stately ballad; Bruce Cloud’s ‘My Book’ is pure Popcorn, while The Composers’ ‘You And Yours’ would be more appropriate for the burgeoning New Breed R&B scene .

Tags and labels apart, what we actually have is a great selection of obscure 60s soul. Best known name here is Brenda Holloway. She has three inclusions … a frantic solo effort ‘I Ain’t Gonna Take You Back’ and as a member of the Soul-Mates on ‘I Get A Feeling’ and as half of the Lovemates on ‘Boomerang’ – a great 60s pop/soul confection.

Songs too from Jewel Akens (his ‘Birds And The Bees’ was Era’s biggest ever pop hit) a young Jimmy Lewis and great unknowns like The Turn Arounds, Tommy Mosley, Vince Howard and Jesse Davis. Listen up too to lots of previously unreleased cuts like the H B Barnum produced ‘Dance With Me’ by Billy Watkins.

ERA NORTHERN SOUL is out now on Kent Records.