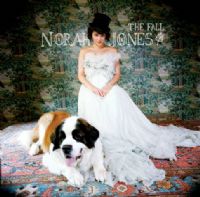 Grammy-winning singer/songwriter NORAH JONES returns with her fourth album, ‘The Fall,’ which is released via Blue Note on November 16th. It’s Jones’ first studio outing since 2007’s ‘Not Too Late,’ and the new 13-track long player reflects a change of musical direction for the 30-year-old New York-born/Texas-raised chanteuse. “I’ve been hanging with the same group of musicians for a long time,” says the singer, “and I thought it was a good time for me to work with different people and experiment a little.” Though it’s a little edgier than her previous records, www.soulandjazzandfunk.com can reveal that ‘The Fall’ ranks with Jones’ finest work. Her collaborators include legendary session drummer, James Gadson, keyboard player James Poyser, guitarist Marc Ribot and songwriter, Jesse Harris, who penned Jones’ debut smash, ‘Don’t Know Why.’ The album’s lead off single is ‘Chasing Pirates,’ which is now available on iTunes.
Read a full review of the album soon at www.soulandjazzandfunk.com