NO STOPPING THE GROOVE! 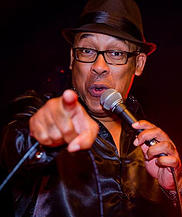 The last 12 months have been good ones for the UK’s GROOVE ASSOCIATION. Led by veteran George Bromfield, the combo won acclaim for their ‘3AM’ long player while their tune ‘Daisy 2-0’ was constantly in demand as too were the band’s cover of Skipworth and Turner’s ‘Thinking About Your Love’ and a great Zhane-inspired ‘Old Skool Magic’.

Groove Association kick off 2015 with a new single that straddles the best of modern soul and the classiest soulful house. Tune in question is ‘Ain’t No Stoppin’ Us’ (no, nothing to do with the great Philly oldie… but just as infectious) and it was produced by George’s old sparring partner Weston Foster.

The catchy beater is officially released on GAB Records on February 27th while you can catch George and his people live at the Jazz Cafe on Thursday 23rd April…. St George’s day, geddit?