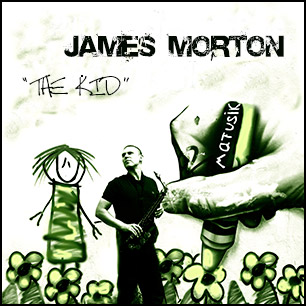 JAMES MORTON is a UK sax man whose inspirations have always been James Brown, hip—hop and funky jazz. Those influences came together on his acclaimed 2010 debut album, ‘Don’t You Worry ‘Bout That’ which, you may remember, was credited to James Morton’s Porkchop (see our reviews archive).

James’ latest album (released in June) is a similarly funky affair, ‘The Kid’. That title comes from the nickname he earned after paying all kinds of gigs all over the South of England from the age of 12… that ‘s right, he was “The Kid”!

Like we said the ‘The Kid’ is a properly funky affair that kicks off in fine ‘Pick Up The Pieces’ fashion with ‘Do Dat’ on which Fred Wesley (a Morton idol) guests. Another funk legend, Pee Wee Ellis, guests on ‘Stand Up’ and cuts like ‘By The Way’ and ‘The Swerve’ keep the funk factor high.

The set features other flavours too: ‘Eyelets’ has a southern soul flavour, ‘The Hymn’ delves into Gospel territory with input from The Soul Collective Gospel Choir, while ‘Step Up’ is a fiery slice of femme vocal funk (the femme being Alex Johansen).

‘By The Way’ and ‘Phone Me Tomorrow’ are looser, jazzier affairs but the real standout is the balladic closer, ‘Trouble’. Weighing in at over six minutes, it’s a big production –strings, choir and lovely Hammond from Dan Moore. It sounds like a stray from the ‘Shaft’ soundtrack! And that to me seems to be James Morton’s secret; he knows and relishes his soul, jazz and funk history and is proud to tap into their magnificent heritage.