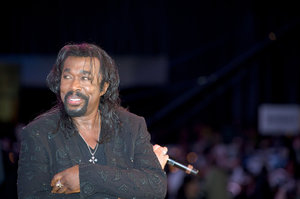 Nick Ashford – one half of the famous husband-and-wife soul duo and songwriting team Ashford & Simpson – died on Monday 22nd August in hospital aged 70 after a long battle with throat cancer.

In the late ’60s he and his spouse, Valerie Simpson, came to the attention of Motown – after writing the hit ‘Let’s Go Get Stoned’ for Ray Charles – and became in-house songwriters for Berry Gordy’s label. They initially rose to fame writing smash duets for Marvin Gaye and Tammi Terrell (among them the immortal ‘Ain’t No Mountain High Enough,’ ‘Your Precious Love,’ ‘Ain’t Nothing Like The Real Thing’ and ‘Glass Onion’). In 1970 Ashford & Simpson masterminded Diana Ross’s first solo album after her exit from The Supremes.

After an aborted album recorded under their own name for Motown – it still remains in the can – Ashford & Simpson left to join Warner Bros in the early ’70s where they wrote and produced a raft of albums before joining Capitol in 1982, where they experienced their biggest hit single, ‘Solid.’

Jerry Leiber died on the same day as Nick Ashford. He was 78. He was also one half of a famous twosome – legendary songwriting duo Leiber and Stoller. Together with his partner, Mike Stoller, Leiber wrote a string of hits in the late-’50s for Elvis Presley (‘Hound Dog’ and ‘Jailhouse Rock’), The Coasters (‘Yakety Yak,’ ‘Young Blood’ and ‘Poison Ivy’) and Ben E King (‘Stand By Me’). The duo were inducted into the Rock & Roll Hall Of Fame in 1987.