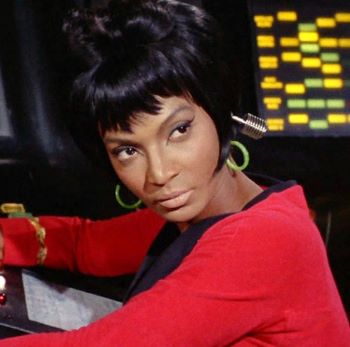 US actress NICHELLE NICHOLS died on Saturday 30th July. She was aged 89 and died of heart failure in Silver City, New Mexico. Nichelle (born Grace Dell Nichols) will forever be remembered for playing Lieutenant Uhura in ‘Star Trek’ – a part that led to  a cascade of acting offers and also a role with NASA promoting diversity in the US space programme.

Before her acting career took off (and indeed in the early days of ‘Star Trek’), Ms Nichols embraced a career in music. She worked in musical theatre and as a recording artist. Her 1967 LP ‘Down To Earth’ is collectable while her Epic single, ‘Know What I Mean’ / ‘Why Don’t You Do Right’ made some waves on the Northern circuit.