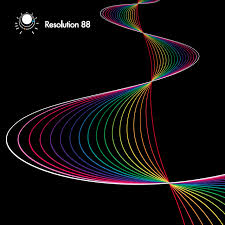 RESOLUTION 88 is a UK-based soul/jazz/funk band and they’ve just released their debut, self-titled album. The team were put together by Cambridge keyboardist Tom O’Grady who cites his main influences as Don Blackman and Herbie Hancock. It was back in 2012 that Tom decided to form a band in an attempt to “give life to the creative ideas that lie within”. He’d always been moved by music that was built around beautiful harmonic changes – the music of Herbie Hancock, Stevie Wonder, Steely Dan… even, yes, Ravel and Chopin! Early in his career he’d also realized that instruments like the Fender Rhodes were ideal to help him deliver his ideas on those “beautiful harmonic changes”.

To help him make his ideas take shape he drafted in four musicians… Tiago Coimbra, Afrika Green, Rik Elsworth and George Crowley. Coimbra, a graduate of Boston Berklee Music College, handles bass; Green – another music graduate – is the drummer; Elsworth, a former student of Cheathams Music College in Manchester, takes care of all other percussion duties; Crowley, a long time member of the London jazz underground, is the band’s saxophonist.

The band’s eponymous 10 track album is already having an impact on the soul-jazz underground. Craig Charles is a fan and he’s featured tracks from the set on his shows – live and broadcast. The sound of the album unashamedly owes much to the sound of Headhunter period Hancock. Expect plenty of growling bass lines and punchy funk as on the obviously spacey ‘Pursuit Of The Jetsonmobile’ (driven by good ole’ George Jetson, no doubt!). There are also plenty of mellow and more laid back moments too. ‘Dya Make Her’ has, in places a feel of Bob James, though George Crowley’s fluid sax prevents blandness setting in.

It’s the opening cut, though, that’s getting a lot of attention. ‘Collidoscope’ is big and beefy. Not quite funky, but certainly jazzy and with a huge soul undertow. Other interesting cuts are ‘In ThRhodes Of Ecstasy’ and ‘UnRaveling’ … that damn French man again!

Find out more about this intriguing band and their committed music @ www.resolution88.com