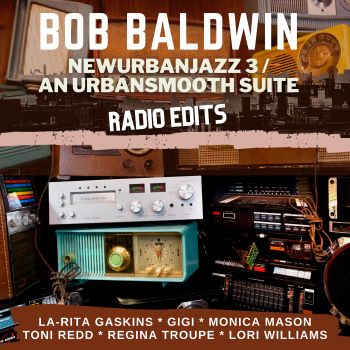 Over a 32 solo album career, smooth jazz keyboardist BOB BALDWIN has won himself a lot of friends in the modern soul community. It’s because his music has its roots in classic soul grooves and his albums will always offer a couple of gems that the modern soulies take to their hearts.

His latest album follows the same pattern. ‘New Urban Jazz 3’ has finally had an official release in the UK and it was trailed by a tasty single… ‘Funk In De Pocket’. It was just that – tough and gritty  with a feisty vocal from La-Rita Gaskin. The so called B side was different altogether, a sweet ballad, ‘Every Moment’ with a Maysa like vocal from Toni Redd. There’s a similar flavour on the Lori Williams’s vocalised ‘Sunday Afternoon’. The title tells you that it’s a laid back groove – with just a light Latin lilt. Lovely.

The album offers a few other vocals – ‘Dance 3000’ (feat. Monica Mason) and ‘Friday Night’ (feat Regina Troupe). The  former is a percussive Samba school romp while the latter is  lovely throwback to those great Soul Weekender tunes… you know stuff from people like Zhane and Sunshine Anderson! Hear up for the Bob’s sparkling keyboard break.

Of course, Bob shines on the instrumentals with the most intriguing being a cover of the Isley’s ‘Footsteps In The Dark’ .

So 32 albums down and Mr Baldwin delivers again. His fans amongst the modern soul crowd won’t be disappointed! Out now