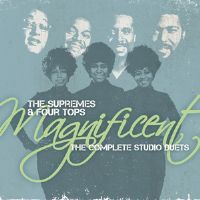 Soul fans should look out for some exciting new reissues and compilations from Universal’s Stateside reissue imprint, Hip-O Select. The label has just reissued an expanded version of JAMES BROWN’S much-overlooked 1967 album, ‘Live At The Garden,’ which despite its title was recorded at the Latin Casino in New Jersey. The new 2-CD set includes a remastered version of the original King LP and also features the full, unedited recording of Brown’s 2-hour source concert. As well as that, the set includes three studio takes from the same timeframe of the single ‘Let Yourself Go.’
Motown devotees will want to check out ‘Magnificent: The Complete Studio Duets’ by THE SUPREMES & FOUR TOPS. A 2-CD set, it contains three original Motown albums cut by the Tops with the first incarnation of the post-Diana Ross Supremes: namely ‘The Magnificent 7’ (1970), ‘Return Of The Magnificent 7’ (1971), and ‘Dynamite’ (1971). Collectors will relish the presence of 12 previously unreleased bonus tracks.
Those who prefer their soul seasoned with blues will find something of interest in an expanded edition of the late KOKO TAYLOR’S ‘What It Takes: The Chess Years.’ Among the 24 tracks is Taylor’s big US R&B smash from 1966, ‘Wang Wang Doodle.’
Look out for reviews soon at www.soulandjazzandfunk.com