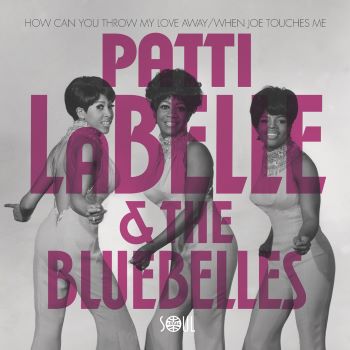 The A side is a soulful and searing outing, ‘How Can You Throw My Love Away’ – a song also recorded by Carla Thomas on her ‘Memphis Queen’ LP. This newly reintroduced 1968 version is  a Detroit production from Don Davis and sounds like it! Wonderful.

The B side is a more up tempo and more intriguing ‘When Joe Touches Me’. This dates from 1969 and was recorded in Chicago by ‘Chi Sound Incorporated’. It doesn’t say it anywhere but is has Curtis Mayfield stamped all over it – the production, the lyrics, the rhyming, the tempo all betray the work of the Gentle Genius. More proof? Well, this “shelved” ‘Joe” was recorded at the same sessions as Patti and the girls’ Mayfield produced  single ‘Trustin’ You’ / ‘Suffer’… nuff said?

Big congrats to Soul 4 Real for getting onto vinyl two quality soul cuts that will be in huge demand from collectors. Great stuff!