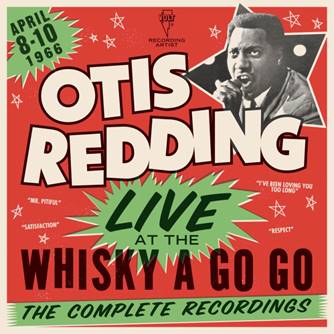 Mention Stax Records and OTIS REDDING is one of the first names that springs immediately to mind. Though he tragically perished in a airplane crash in December 1967 at the age of 26, he left behind a rich legacy of music that continues to be appreciated. A new box set by the revived Stax label via UMC is released on October 21st and expands the husky-voiced singer’s posthumously-released 1968 classic in-concert LP, ‘Live At The Whisky A Go Go,’ into a 6-CD set. For the first time ever, each of Otis’ two sets which he performed during his three-day residency (Friday April 8th – Sunday April 10th 1966) at the legendary rock venue on Sunset Strip in Hollywood, Los Angeles, will be commercially available.

The end result is an exciting aural document that captures Otis Redding at arguably the peak of his powers. His performances include some of his most iconic songs, including ‘I’ve Been Loving You Too Long,’ ‘Mr Pitiful,’ ‘Respect,’ ‘These Arms of Mine,’ and incendiary versions of the Rolling Stones’ ‘(I Can’t Get No) Satisfaction.’ The original four-track masters have been remixed and remastered so well that it sounds like Otis is singing in the same room as the listener. The music is accompanied by a poster plus insightful liner note commentary courtesy of journalist Lynell George and the box set’s producer, Bill Bentley. Expect to pay around £45.00/$60.00