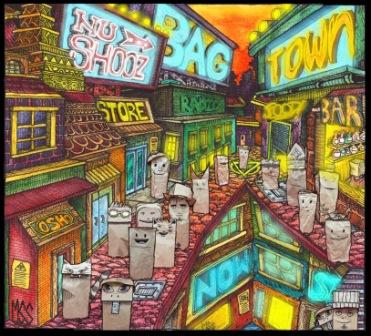 Portland band NU SHOOZ enjoyed a massive hit in 1986 with the iconic dancer ‘I Can’ Wait’. Still played regularly in clubs worldwide, the cut’s been used in numerous sound tracks and ads as well as being sampled by people like Vanessa Williams, 50 Cent and Questlove. To celebrate the 30th anniversary of the tune Nu Shooz are releasing a brand new long player… ‘Bagtown’…their First New Album since 1988.

Nu Shooz are essentially the husband and wife team Valerie Day and John Smith. They met at a hippy commune in Portland and in 1979 they formed Nu Shooz as a “fusion-soul band”. The outfit went through numerous personnel changes but Valerie and John remained at the core. In 1985 they recorded ‘I Can’t Wait’ which became a regional hit. Eventually picked up by Atlantic, ‘I Can’t Wait’ became an international hit followed by ‘Point Of No Return’ and ‘Should I Say Yes.’ Nu Shooz made three albums for Atlantic, but were dropped in 1982.

John then concentrated on writing music for commercials and Indie cinema while Valerie was in demand as a session percussionist and vocal coach while she also sang with various jazz outfits. In 2006 she re-recorded ‘I Can’t Wait’ then in 2010 Valerie released an album of chamber jazz, ‘Pandora’s Box.’ Two years later the duo released an album of archival material called ‘Kung Pao Kitchen’, all recorded in the late-80’s and never before released.

More recently they joined 80s revival tours and with a new live band (all former members from different incarnations) John and Valerie felt reinvigorated and finally decided to cut a whole new album… ‘Bagtown’. John explains: “I began work like a mad scientist; lunch bags strewn around the studio began to envelop me. I realized there was something of an art installation happening. I started making cardboard buildings and bag people. I built a bag city! That inspired the music. I started to hear the music that would play in this bag town.”

But what exactly is this new “bag town” music like? In honesty, it’s not a million decibels away from what we came to know as the signature Nu Shooz sounds…. that’s to say 80s style electro soul and funk, sprinkled with tight brass stabs and layered jazzy harmonies (in the style, say, of Manhattan Transfer). Hear it at its best on ‘Soul Cushion’ or the atmospheric ‘Way Outside’ complete with party effects. Biggest immediate grabber is ‘Real Thing’. It rides in on a great, loping bass line though the estate of Norman Whitfield might be interested in having a good listen to the intro. Most “unusual” cut is the plaintive ballad that is ‘The Rail I Ride’ … simple, largely acoustic and Valerie’s in fine form!

BAGTOWN by NU SHOOZ is out now