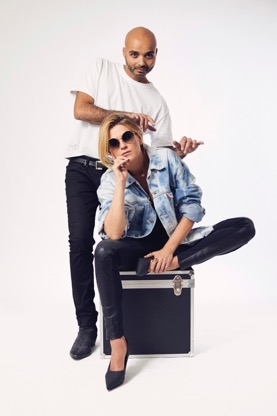 ‘Entre Eux Deux’ – whose title translates to “between us two” – is like eavesdropping on a whispered conversation between two lovers and its release, scheduled for 20th May via Decca Records, is preceded by today’s release of a single from it: a languorous romantic ballad called ‘This Foolish Heart Could Love You,’ a song co-written by Gardot and Powell, who spent two intense weeks together in the ‘City of Light’ writing most of the album’s songs.

Today’s release of the single and the announcement of the new album coincides with Gardot becoming the recipient of France’s highest cultural accolade; she becomes a Chevalier in the prestigious Ordre des Arts et des Lettres, a rare honour that has been previously bestowed on several of her compatriots including the writer William S. Burroughs and composer Philip Glass.

Says Melody Gardot of the new album: “If I had to sum up the record in a few words, I’d say this record is a dance between two people who love and value the same things: deep poetry and solid melodies.”  She adds: “The title ‘Entre Eux Deux’ stands true; it is a peek into the world of two artists who just really dig each other…we hope you dig it too.”

“This record is the most wonderful gift a pianist-composer could ever dream of,” explains Gardot’s musical confrere  Philippe Powell. “To write and perform in a duo with one of the great artists of our time is the greatest musical experience I have ever had. I am profoundly grateful to Melody, for her love, her trust, her guidance, for bringing out the best within me, and for tireless efforts, and countless hours of hard work to produce this beautiful record.”

‘This Foolish Heat Could Love You’ is out today; the album ‘Entre Eux Deux’ will follow on 20th May 2022 via Decca Records.