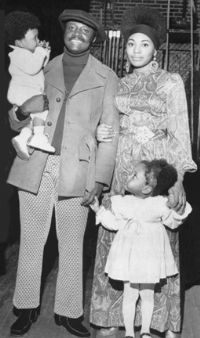 LALAH HATHAWAY – the 39 year-old daughter of legendary soul singer, DONNY HATHAWAY – releases her fourth solo album, ‘Self Portrait,’ in June on Stax Records. The follow-up to 2004’s well-regarded long player ‘Outrun The Sky,’ it comprises twelve self-penned songs and features cameos from singer, Rahsaan Patterson, and ex-Miles Davis bass player, Marcus Miller.
Fans of Lalah’s father, Donny, might be interested to know that there’s a new book out focusing on the singer’s life and music. It’s not a standard biography though – rather, it’s an ambitious collection of prose poems by ED PAVLIC entitled ‘WINNERS HAVE YET TO BE ANNOUNCED – A SONG FOR DONNY HATHAWAY.’ It’s published by The University of Georgia Press and priced at $19.95.