NEW JAZZ ALBUMS COMING YOUR WAY IN APRIL…AND BEYOND… 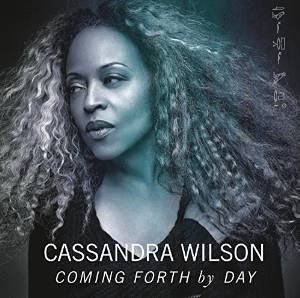 T.S. Eliot once wrote that “April is the cruellest month” but for jazz fans, this particular April is anything but cruel given the exciting range of new jazz albums due for release. Below is just a taste of what to expect…

CASSANDRA WILSON’S magnificent ‘Coming Forth By Day‘ is out this week (look for our review of it in SJF’s review pages). It’s a homage to Billie Holiday who was born one hundred years ago this month (By the way, ‘Lady Day’ also has her won retrospective out, ‘The Centennial Collection,’ via Columbia/Legacy, which features twenty classic tracks spanning the years 1935-1944 and includes the singer’s seminal performances of ‘God Bless The Child,’ ‘Gloomy Sunday’ and ‘Strange Fruit’).

South American singer/pianist, ELIANE ELIAS has a new album out that taps into her musical roots. ‘Made In Brazil‘ on Concord was recorded exclusively in her hometown, Sao Paulo, and includes cameos from Ed Motta and acclaimed vocal group, Take 6, led by Mark Kibble.

Alto saxophonist DAVID SANBORN returns to the fray with ‘Time And The River‘ on Okeh. It was produced by Marcus Miller and features nine tracks, including a version of The Temptations’ ‘I Can’t Get Next To You’ featuring current Tower Of Power vocalist Larry Braggs. Also listen out for a rare cameo from Randy Crawford of Michel LeGrand’s ‘Windmills Of Your Mind.’

The reactivated Impulse! label is now home to New York-born singer, INDRA RIOS-MOORE, who relocated to Denmark after falling in love and getting married to a Danish jazz musician. She won an award in her adopted country for her 2010 album, ‘Indra’ and now releases her second album – and her first for Impulse! –  called ‘Heartland.’ A remarkable jazz vocal set, it’s expertly produced by Larry Klein, renowned for his work with Joni Mitchell and Madeleine Peyroux.

Another American who lives abroad is KYLE EASTWOOD. The bassist/composer, who lives in Paris, has a new album called ‘Timepieces‘ released via Global Village on April 20th. As well as original material it includes a couple of covers (Herbie Hancock’s ‘Dolphin’s Dance’ and Horace Silver’s ‘Blowin’ The Blues Away’) plus Eastwood’s new version of the main theme to his score to his father Clint’s World War Two movie,  ‘Letters Of Iwo Jima.’

Due to be released the same day is a ‘Sylva,’ an incredible collaboration between the hard-gigging Grammy-winning Brooklyn band, SNARKY PUPPY, and the large Dutch orchestral ensemble, the Metropole Orkest. Featuring brand new material (a six-part suite specially composed by Snarky Puppy’s leader, Michael League) and recorded live without any overdubs, ‘Sylva’ is a stunning tour de force that will accrue the band many more devotees.

Looking forward to May, Los Angeles saxophonist/composer KAMASI WASHINGTON has created something even grander in scale. The aptly-titled ‘The Epic‘ is a sprawling, 172-minute three-CD concept album that has his band, The Next Step, augmented by a 32-piece orchestra and 20-member choir. The end result is simply mind-blowing. It’s released on the Brainfeeder label.

Much further ahead in June comes MELODY GARDOT’S fourth album, ‘Currency Of Man,’ which is due on the first of that month. Produced by Larry Klein it finds the Philly-based chanteuse morphing from a sophisticated jazz artiste into a gritty R&B and blues-style singer. Prepare to be stunned by her transformation.