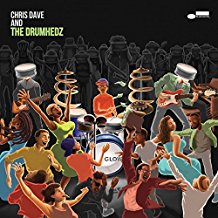 Iconic jazz label, Blue Note, which will celebrate its 80th birthday in 2019, has a trio of exciting releases due at the start of 2018.

First up is the self-titled album by CHRIS DAVE & THE DRUMHEDZ, which is due for release on 26th January. R&B fans will be familiar with Dave from his time as the sticks man in the band Mint Condition. More recently, he has appeared on albums ranging from Robert Glasper, Maxwell, and D’Angelo to Lady Gaga and Justin Bieber.  His new album, a seamless meld of jazz, R&B and hip-hop flavours, features cameos from Anderson. Paak, Stokley Williams, Bilal, Keyon Harrold, Goapele, James Poyser, and DJ Jazzy Jeff.

On the same day in January,  the venerable, turban-attired, soul-jazz organ player, DR. LONNIE SMITH, releases ‘All In My Mind,’ a sensational 7-track live album recorded at New York’s Jazz Standard venue, earlier in 2017. Don Was produced it. This is the 75-year-old Hammond B-3 master’s second tenure with Blue Note, his first being during the years 1968-1970 when he recorded four albums for the label, including ‘Turning Point’ and ‘Drives.’  The new album features Dr. Smith’s trio, which is comprised of guitarist, Jonathan Kreisberg, and drummer, Jonathan Blake. Another sticks man, Joe Dyson, features on one track, as does singer, Alicia Olatuja.