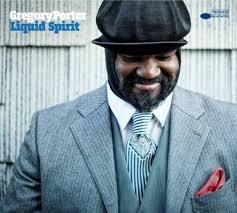 Grammy-nominated soulful jazz man, GREGORY PORTER, is back with a new album – his third – on September 9th and it’s his first for a major label. After two albums for jazz indie, Motema, California-born Porter, who signed to Universal earlier in the year, has his first album for the company, ‘Liquid Spirit,’ released via their recently acquired Blue Note imprint.

The fourteen track album which straddles the jazz-soul divide contains mostly self-penned material from the hat-wearing hirsute singer whose highly expressive, opulent baritone voice is imbued with gospel, soul, blues and jazz colouring.  There are also a couple of notable covers – the ’60s soul classic ‘The “In” Crowd’ is given a terrific vocal makeover complete with a finger-clicking backbeat. And there’s also a beautifully intimate, late night, rendition of the jazz standard, ‘I Fall In Love Too Easily.’  It all adds up to a sensational album that should cement Porter’s reputation as one of the best and most exciting jazz singers of the current era.

Look out for a full review in August.