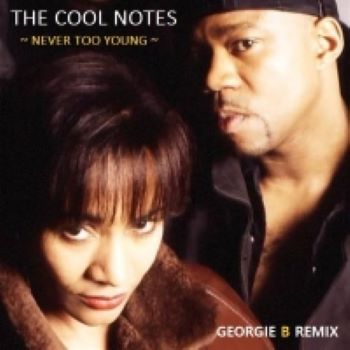 Earlier this year we enjoyed a comeback from South London band, THE COOL NOTES. Soul vets will know the band go back to the 70s when they played reggae. In 1983 the band changed direction  and embraced soul, scoring big hits with ‘You’re Never Too Young’ and  ‘I Forgot’ while a catchy tune called ‘Spend The Night’ just missed the UK top 10.

Since the 90s the Cool Notes have been a trio with Steve McIntosh and Heather Harewood as the faces/voices of the band with Joe Francis working alongside them in the studio. The band’s April return saw a new Georgie B mix of their oldie ‘Spend The Night’ hit #2 on the UK soul chart – deservedly so!

The success convinced the Notes to continue in the same way, so they’ve had another of their old hits remixed (twice!) and the new tweaks of their 1984 #1 soul chart hit ‘You’re Never Too Young’ have plenty to offer the modern soul crowd. First up, the  Georgie B mix is sweet and lovely retaining all the naïve innocence of Heather Harewood’s vocal. The second mix, courtesy of Steve Mac is special too… laid back and cool, it’s based around the back beat of Lowrell’s ‘Mellow Mellow’ and on it, Ms H sounds a little less naïve! The two mixes make a proper double A sided single.

The band is often  asked  why not release new material. Well, the band is now back in the studio, after the covid lockdown, working  on a brand-new album of all new songs, and planning for an early 2022 release.

In the meantime, the mixes of ‘You’re Never Too Young’ are good to go now via the Cool Notes website: www.cool-notes.co.uk