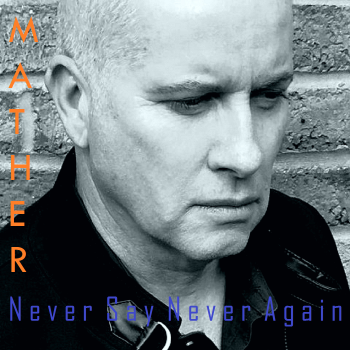 STUART MATHER is a blue-eyed UK soulster who prefers to work just using his surname. You may remember he was the “Mather” in soul duo Mather & Kingdon whose ‘Life’s So Sweet’ won lots of support.

After that he sort of “retired” but made several comebacks -most notably with a cover of the old Lulu/Melba Moore number, ‘I Could Never Miss You More Than I Do’ and his own album ‘No Looking Back’.

Now he starts his new year with another new album, the ten tracker that is ‘Never Say Never Again’. The collection is actually Mather’s fourth solo album in five years – so, not bad for someone who was all set to pack it all in!

As with his previous outings, all the music on ‘Never Say Never Again’ has been performed, written and produced by his good self. The only assistance comes from reeds man Alan Hook (a long-time collaborator) who adds sax and flute to three of the tunes including the lovely, moody ballad ‘Forever Love’. Best of the up-tempo numbers is ‘Never Say Never Again’. It boasts a great (familiar?) bass line and offers a pleasing modern soul vibe. Little wonder it was chosen as the LP’s title cut.

Overall, the sound is sweet and undemanding… nothing too complex or demanding; nothing that’s mould-breaking… just optimistic, good time blue eyed soul with a garnish of pop. Who knows if there’s’ more to come from Mather? Let’s just say, never say never!