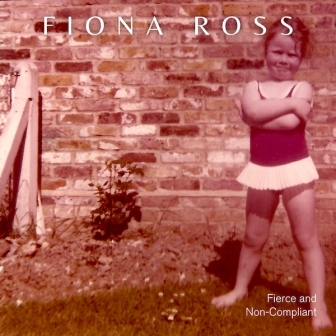 ‘Fierce and Non-Compliant’ is the latest long player from UK singer FIONA ROSS and it follows her acclaimed 2017 double CD ‘Just Me (And Sometimes Someone Else)’. The new collection offers 13 tracks reflecting Fiona’s passion for contemporary jazz in its widest sense… so here expect Latin Jazz tunes, vintage Jazz club romps, and a nod to neo soul along with sombre balladeering. The overriding flavour though is the  sound of classy musical theatre – reflecting Fiona’s background – her first big gig was playing in ‘Annie’ aged just 8! Soundwise the mood constantly switches from the jaunty and jazzy to sombre and melancholic and all shades in between; while lyrically each song has its own narrative – as in the best musical theatre.

Multi tasker Fiona also works as a jazz journalist and the network she’s built up there has allowed her to invite some top jazzers to contribute to ‘Fierce and Non-Compliant’. Amongst the players are bassist Snow Owl, singer Adam Cooper, female saxophonist Kim Cypher and guitarist Marco Piccioni … while sleeve notes come via Mrs Dexter Gordon (Maxine).

FIONA ROSS: ‘Fierce and Non-Compliant’ out now on Therapy Records.