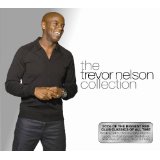 Smooth talking TREVOR NELSON is a man of many talents and over the last few years his career’s blossomed in all kinds of ways – culminating in him being asked to commentate on the 2012 Olympic Opening Ceremony. Urban Music, however, remains his first love and chief priority and to make the point he’s currently putting the finishing touches to a huge 3 CD, 60 track compilation that will hit the stores in January.

THE TREVOR NELSON COLLECTION (out on Sony) features all the BIG tunes from the last 30 years. TREVOR says, “It was a lot of fun putting together a collection of some of the R&B highlights of the last 30 years. There’s a lot to choose from but hopefully there’s a few defining moments for the fans to enjoy in one place.”

Amongst the featured tracks there’s MICHAEL JACKSON’S ‘Rock With You’, LUTHER’s ‘Never Too Much’, SOUNDS OF BLACKNESS’ ‘Optimistic’, MARY J’s ‘Real Love’, MONTELL JORDAN’S ‘This Is How We Do It’ and ZHANE’S ‘Hey Mr DJ’. The UK’s contribution to the collection includes music from SOUL II SOUL, MARK MORRISON, THE BRAND NEW HEAVIES and CRAIG DAVID.