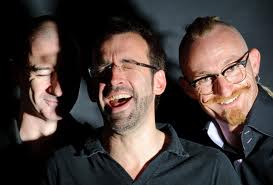 Over the past few years NEIL COWLEY had cemented his position as one of the UK’s preeminent jazz pianists. .. and that situation will be further underscored with the release of his brand new album early in the New Year. ‘The Face Of Mount Molehill’ is set for release on 23rd January 2012 and the set marks a major change of direction for COWLEY and his trio. Since the release of his last set, 2010’s ‘Radio Silence’, COWLEY has explored his fondness for grand , commanding sounds and orchestration and so the new album offers 12 original tracks featuring a string ensemble and the guitar of LEO ABRAHAMS (known for his BRIAN ENO collaborations)

The NEIL COWLEY TRIO are also known for their remarkable and engaging live performances, which always maintain a quirky sense of humour at their core. On 15 March 2012, the trio will perform with a specially selected ensemble of string players, THE MOUNT MOLEHILL STRINGS, at the Queen Elizabeth Hall, London’s South Bank, ahead of further UK dates, listed below

For more details go to – www.neilcowleytrio.com