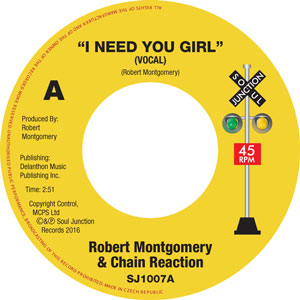 UK soul reissue specialists SOUL JUNCTION get into their 2017 stride with a very strong release from ROBERT MONTGOMERY and CHAIN REACTION.

Robert Montgomery was (indeed is) a soul multi tasker… singer/songwriter/producer/ keyboardist who hails from Rome…. Rome, Georgia that is!

Robert began his soul odyssey in a band called The Sons Of Aries but soon quit to seek a solo career. One of his early efforts was a self-penned song called ‘I Need You Girl’ which he recorded with remnants of his old band that he re-christened Chain Reaction. The track was released on Jeffery Jackson’s Crescent Records in 1976 but only 1000 copies were ever pressed and success was limited… to say the least!

Montgomery then worked with Villaruz and Ripple (remember their ‘The Beat Goes On’?) and tried recording more of his own songs. But as hopes of stardom faded he cut his losses and went into selling insurance!

You can probably guess what happened next. Right … copies of ‘I Need You Girl’ started to win plays on the UK and European rare and modern soul circuits and the demand for the cut grew and grew.

To satisfy the demand Soul Junction are reissuing the song on limited edition 7″ vinyl and it’s well worth tracking down. It’s a great mid 70s groove that in places reminds us of early Ronnie McNeir, especially in the jazzy undertow, the spoken monologue and the quirky breaks. The B side, by the way, is the instrumental version which shows off Mr Montgomery’s instrumental prowess.