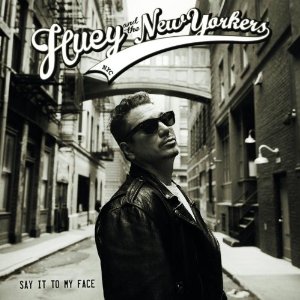 HUEY MORGAN – seemingly on a sabbatical from the Fun Lovin’ Criminals – has just released a solo project … his first; but as is the way with the enigmatic MORGAN, the 12 tracker is credited to HUEY AND THE NEW YORKERS.

The album ‘Say It To My Face’ isn’t a soul set and MORGAN will the first to admit he’s no soul singer, but you can hear plenty of soul influences in the music – the music which the man says he’s always wanted to make. The long player opens in jaunty fashion with ‘Stick It To The Man’ which has a real feel of ‘Ghostbusters’ about it – especially in the RAY PARKER style riffling. From there there’s all kinds of everything from a DIRE STRAITS sounding ballad, ‘Shaniqua’ through to the country soul of ‘Christmas By The Side Of The Road’. The album’s full of sonic and lyrical references to the Big Apple and is out now on Naim Edge Records – a subdivision of the Naim Audio company.