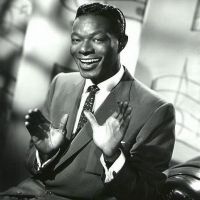 The jury’s never been unanimous about the merits of remix albums. You know the kind of thing… hot shot, young Turk producers, artists and mixers are let loose on classic material in an attempt by cash-strapped record companies to make extra royalties out of the back catalogue. The latest “classic artist” to be awarded such a dubious makeover is the wonderful NAT KING COLE. One of COLE’S daughters, CAROLE (curator of her dad’s back catalogue) has allowed people like CEE-LO, will-i-am, SALAAM REMI, AMP FIDDLER, JUST BLAZE and THE ROOTS to tweak 13 COLE classics and the result is the brand new collection ‘Re:Generations’, released on EMI in March. CAROLE says: “As the curators of our father’s music, image and likeness, my sisters and I strive to keep dad in the mix and as innovative as he was back in the day. With ‘Re:Generations’, we want to musically and visually bridge the so-called generation gap and hopefully create mutual admiration and respect between teens, parents and grands of every culture”. www.soulandjazzandfunk.com will deliver its verdict via an in-depth review very soon….