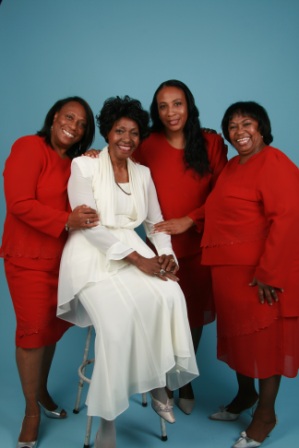 NAOMI SHELTON AND THE GOSPEL QUEENS represent the Gospel arm of the famous Daptone label and though it’s something like 6 years since the release of their last album the group are just putting the finishing touches to their next set, ‘Cold World’.

In the meantime they’re heading to Europe for a series of festival dates and kick things off with an exclusive London show at Chelsea’s Under The Bridge venue on July 15th.

The Daptone people tell us that a soul-searing, testifying time is guaranteed for all. Naomi’s vocals are legendary and her “Queens” (Edna Johnson, Bobbie Jean Gant and Angel McKenzie) are seasoned veterans. The ladies will be backed by an all star band, whose ages range from 17 to 82! Amongst the players are leader Brother Cliff Driver (he’s worked with Baby Washington, Little Willie John, King Curtis, Sam Cooke, Jackie Wilson, and Solomon Burke), bassist Fred Thomas (who spent many years with the JBs) and Daptone house drummer Mikey Post.

More details of the show from the venue.