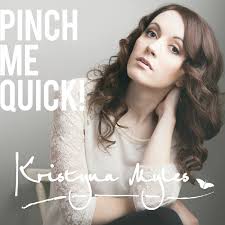 UK singer/songwriter KRISTYNA MYLES may not be a familiar name but the release of her debut album, ‘Pinch Me Quick’, in March could well change that. Since winning BBC Radio 5 Live’s ‘Busk Idol’ competition the Manchester-based artist has worked throughout Europe, supporting people like Lisa Stansfield, Mick Hucknall, Will Young and Lemar. Little wonder, then that she was signed to a major record label for a five album deal! But after three years and only one single released by the label, Kristyna decided the time was right to take back control of her career.

So the newly independent Ms M hooked up with Mercury Award nominated producer Andy Ross and ex Style Council drummer Steve White to record a version of the Style Council’s ‘The Paris Match’. The gentle, insinuating cover won support from no less an admirer than chief Councillor Paul Weller and the song went on to become an underground hit.

Hugely encouraged, Kristyna has gone onto record a full album – ‘Pinch Me Quick’, and it’s out there on the racks from March 10th. In the meantime a single’s just been rushed out for the Valentine’s love fest. ‘Just Three Little Words’ is a quirky, acoustic pop ditty that actually isn’t that representative of the upcoming LP’s overall sound. The general thrust of ‘Pinch Me Quick’ is tougher and though it’s not a soul album there’s a soul undertow to proceedings… you’ll get rock and country flavours too!

KRISTYNA MYLES’ PINCH ME QUICK! Is released on Take Note Recordings on March 10th . For more info go to www.kristynamyles.com