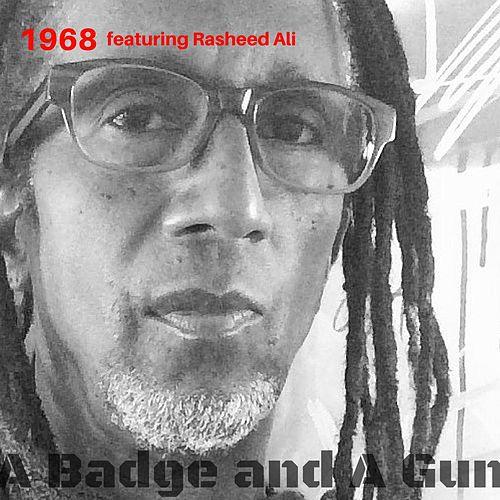 Two of the most acclaimed and, yes, provocative albums of the last year or so have both been crafted by New York’s RASHEED ALI. First up we had ‘1968 Soul Power’ which was followed by the equally energized and questioning ‘1968 Black. Power’. We’re told that Rasheed has the third episode of his epic trilogy almost ready for release but in the meantime our man’s just issued two new tracks as his response to recent events in the States … events that have rightly shocked decent thinking people worldwide.

First up there’s the sombre ‘A Badge And A Gun’. That title tells you where the song’s coming from… yes, it’s Rasheed’s thoughtful response to the violence perpetrated against Black citizens by trigger-happy police. As ever, Rasheed is brutally honest. He says the song is “a non-commercial, socially conscious release which means more to me that it be a conversation-starter than a money maker.” Like all true, serious artists (across every genre) Rasheed is reacting artistically to things that disturb him.

The second “new” song is a little less melancholy. It’s actually a remix of ‘1968 Soul Power’, the title cut from the first album. This breezy new tweak has been sub-titled ‘Island Boy mix’ and the raison d’être for the new take is for Rasheed to re-state what we all know anyway … that “with the power of love, everything is possible.”

Neither of these singles will be on the next album ‘1968:Love Power! ‘ Rasheed informs us that , “they are both a bridge to part three of the 1968 Trilogy which will be released before year’s end”.

You can check out both ‘A Badge And A Gun’ and ‘Island Boy’ via iTunes, Amazon, CD Baby and other portals.