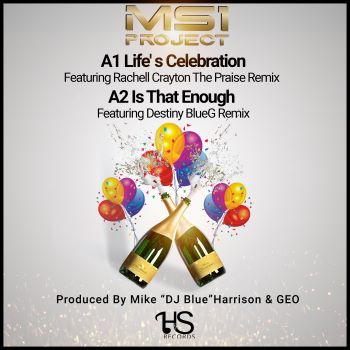 One of that album’s big tunes was the opener, ‘Is That Enough’ – a soulful mid-tempo groove with sweet and beguiling vocals from Destiny. In the modern way, the MS boys have had that track remixed for single release and the new “Blue G” remix is even more effective. It ditches the ponderous intro and gets into the groove straight away. To create the double A sider, there’s also a remix of ‘Life’s Celebration’. With vocals from Rachell Crayton, this was another pleasing mid-tempo soul groove and for the new “Praise” remix the tempo remains the same though, as the mix title  suggests, there’s an added  gospel flavour perfectly suited to the song’s sentiments.

Both mixes are good to go now via ms1project.bandcamp.com