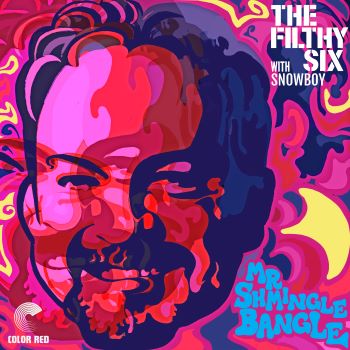 Their latest recorded offering is the oddly named ‘Mr. Shmingle Bangle’ – a rework of a tune that Etwell recorded a year or so back. He now firmly places it in soul/jazz setting  – he says, “reminiscent of Cannonball Adderley’s “Azule Serape” from his iconic ‘Live at the Lighthouse’ album.”

See if you agree when  the Filthy Six’s new ‘Mr. Shmingle Bangle’ wins release via Color Red on November 12th.

The title of the tune, by the way, is a refence to one of Etwell’s old college roommates, James Bush. It seems James was quite a character with a special way with words, using odd phrases like “shmingle bangle”! Bush was , we’re told, “a rich and cosmic character who lived life to the fullest”. Now sadly deceased, “Mr. Shmingle Bangle!’ is a tribute to him. The track, by the way, features good old Snowboy on percussion!