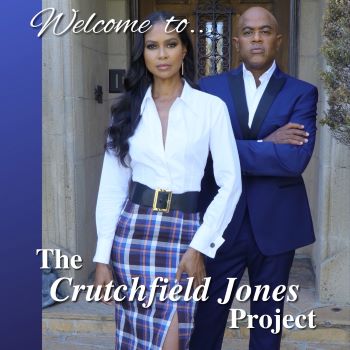 It was just last year when we were introduced to the smooth, soulful sounds of CRUTCHFIELD JONES. We learned that the outfit were actually a US husband and wife duo, Shireen and Ricky. The couple first met 30 years ago working for Motown. Shireen was part of The Good Girls vocal group while Ricky was lead singer in Yours Truly.  It seems that the pair eventually married (different people!!!) and started  families but after two divorces, Shireen and Ricky reconnected and eventually got married and started making music again and their first single was the R&B flavoured chugger ‘Crazy Ass’  That was followed by the romantic ‘Queen Appeal’ which  was based around Sade’s ‘Your Love Is King’ alongside Babyface’s ‘Whip Appeal’. It was a clever production and there was obvious chemistry between the two voices.

With that release Mr and Mrs Jones promised us more music and they now deliver with ‘The Crutchfield Jones Project EP’. The mini album’s a five tracker that betrays the pair’s penchant for smooth, sophisticated soul. The opening ‘Cloudy’ is a standout – a gentle builder of a tune. The beatier ‘Toast To Mr And Mrs Jones’ shows how clever the pair’s songwriting is. Though it’s not obvious this one clearly has its genesis in the classic ‘Me And Mr Mrs. Jones’. Nice tune. As is the ballad ‘Sunshine’ – wonderful vocals here. ‘Find Me’ is quirkier and will probably appeal more to the R&B contingent than the soul crowd.

What’s apparent across this mini collection is that classic duets can’t be cobbled together. There (obviously) needs to be a real chemistry between the participants (witness Marvin and Tammi) and with Shireen and Ricky that chemistry is obvious from the start,. But you’d expect that, wouldn’t you… after all they are Mr and Mrs Jones!