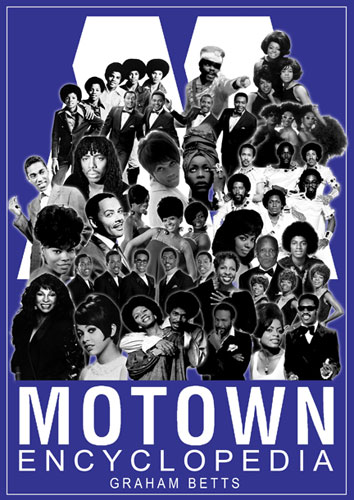 Few record labels have had more books published on them than Berry Gordy’s MOTOWN. The Detroit label has been anthologized, analysed and eulogised in print more than any other record label…. and why not? The label is iconic; it’s impact enormous; its music timeless…. so why not have another weighty tome telling us like it was (indeed like it is) with Motown.

This new Motown book though is a tad different… it’s an encyclopaedia, yep, a proper reference book! The author of this authoritative work is GRAHAM BETTS who’s been working on the project for over 3 years and he’s proud to claim that it’s probably the most detailed book written about the Gordy Empire…. and so it should be , given Graham’s CV in the music biz.

As a Press Officer for Pye Records and later CBS Records in London, Graham handled the publicity for several former Motown artists, including Gladys Knight & The Pips and Edwin Starr whilst with Pye (through their licences with Buddah and 20th Century Records respectively) and would work with Gladys Knight & The Pips , Billy Griffin and Marvin Gaye whilst at CBS Records.

As a journalist for Melody Maker, Blues & Soul, Record Buyer and several other outlets, he has interviewed many Motown greats, including Stevie Wonder, Diana Ross, The Temptations, The Commodores, Hal Davis, High Inergy and Harvey Fuqua.

During the course of writing the Motown Encyclopaedia, he has re-acquainted himself with many former Motown artists, checking facts and feats and getting the background stories to some of the greatest music ever produced. In short, nearly forty years of music industry experience has resulted in what could well be definitive book about Motown.

‘The Motown Encyclopaedia’ is not laid out in chronological order; rather the book gives every artist who had a record released (and in some cases merely scheduled for release) their own biography, including those whose only Motown connection was a track on a soundtrack or compilation.

To these are added the key executives who ran the label from its formation in 1959 through to its sale in 1988, the musicians who made the famed Motown sound and the writers and producers who came up with the goods on a regular basis.

Every single and album that made the Top Ten (and, for British fans, those EPS that similarly made the Top Ten when there was a separate chart) in either the UK or US is given an entry, as well as the soundtracks that were issued on Motown. There are entries for every film instigated by Motown Productions and details of the various label imprints, both those within Motown as well as those outside the organisation that licensed repertoire from or to Motown. The cover’s great too… paying homage to those wonderful 60s Motown collages that graced many of the label’s early compilations.

There’s an awful lot covered in the book’s 1,178 entries. No wonder the book is already an Amazon bestseller in its genre and it’s available now through the usual book download portals … Apple, Smash Words and, of course, Amazon.