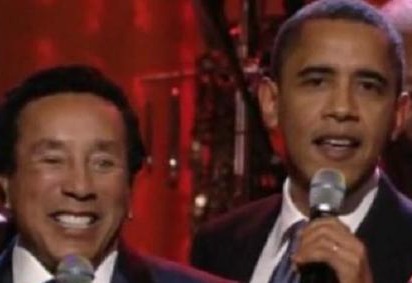 In his lengthy career BERRY GORDY has won countless accolades and honours but here@ SJF we have a sneaky suspicion that the show he helped put together on Thursday, 24th February

On that auspicious day PRESIDENT and MRS. OBAMA hosted a tribute to Motown at the White House. MC for the evening was JAMIE FOXX and Motown luminaries STEVIE WONDER and SMOKEY ROBINSON performed live to an ecstatic audience. Other Motowners in attendance included DUKE FAKIR, MARTHA REEVES and, of course, GORDY himself, while JOHN LEGEND, SEAL, SHERYL CROW, NICK JONAS and JORDON SPARKS offered their version of Motown classics.

It’s been a tradition that every two years the White House holds an ‘In Performance’ concert and the reason for the Motown special was two-fold. First – the show was part of the celebrations for Black History Month and, second, because MR OBAMA is a huge Motown lover –quipping that his wife wouldn’t have married him if he hadn’t been a long-time fan of Motown.

Various web sites are currently showing wonderful footage of the show – all the best search engines will help you find them.