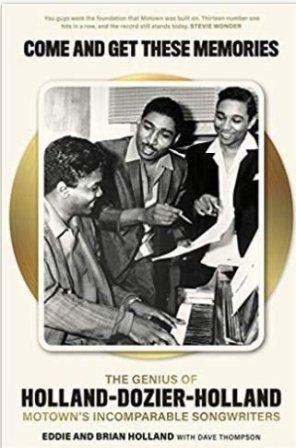 ‘Come And Get These Memories’ is an apt title for a new book that chronicles the achievements of the mighty Holland-Dozier-Holland. The book, published to tie in with the Motown 60 celebrations, has been written by Eddie and Brian Holland in association with Dave Thompson and the siblings say that putting it all together has given them the opportunity to set the record straight on a number of matters.

The book takes us from the projects of Detroit (where the Hollands were brought up by their grandmother and single mother) to the creation of perhaps the greatest song writing triumvirate in music history, crafting countless classics like Martha and the Vandellas’ ‘Come And Get These Memories’ (for which the book is named) .

The book is published today (10th October) by Omnibus Press. The co-author … Dave Thompson, is a UK born, US based writer who’s a columnist for Goldmine magazine; his work has also appeared in Rolling Stone, Alternative Press, Mojo, Record Collector and many other major publications. The foreword to the book is by Motown President and long time promotions man Barney Ales.

Watch out for a soon-to-come review in our reviews section.