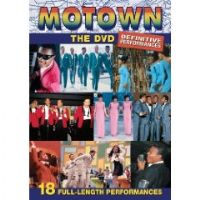 As the Motown’s fiftieth anniversary year draws to a close, Hip-O – in collaboration with Universal – have just released a wonderful DVD of definitive Motown performances from artists like MARVIN GAYE, THE TEMPTATIONS, STEVIE WONDER, DAVID RUFFIN, THE CONTOURS, GLADYS KNIGHT AND THE PIPS, THE MIRACLES, KIM WESTON and many more. The performances are all drawn from filmed TV appearances between 1965 and 1972 and there are numerous bonus features including an interview with BERRY GORDY, footage of the famed Motown picnics and a news reel of 1959 – the year Motown was founded. The package is imaginatively titled ‘Motown – The DVD… Definitive Performances’.