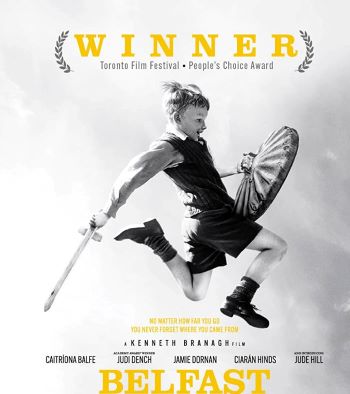 Movie buffs will know one of the most eagerly anticipated films of the new year is ‘Belfast’ – a semi-autobiographical, coming of age story based loosely on the reminiscences of Belfast actor/director Kenneth Branagh. Branagh both wrote and directed the film. Set against the “Troubles” of the 60s and 70,  he calls it  his “most personal film”.

Since its festival launch in September, ‘Belfast’ has won numerous awards and accolades and it’s hotly tipped for Oscar and Golden Globe nominations.

The film’s soundtrack is largely the work of VAN MORRISON – an obvious choice for the film makers. Morrison provides 9 songs for the movie – most chosen from his extensive back catalogue – tunes like ‘Bright Side of the Road’ and ‘Caledonia Swing’. There is one new Morrison song – ‘Down To Joy’ which is essentially ‘Belfast’s’ main title theme and like the movie itself, tipped for Oscar glories.

The rest of the soundtrack is made up of nostalgia laden cowboy, movie and TV music (like the ‘Star Trek’ theme.