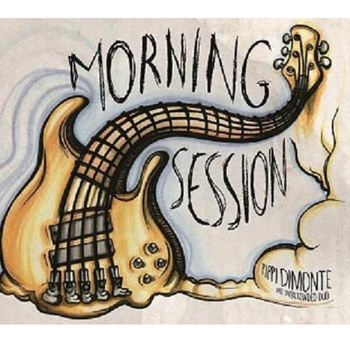 The wonderfully named PIPPI DIMONTE is an Italian bassist who cites his chief influence as Jaco Pastorius. He’s recently joined forces with drummer NICOLA BENETTI and guitarist ALESSANDRO DE LORENZI- collectively “The OVERCROWDED DUO” to share their love of jazz and funk. They work regularly in and around Bologna where audiences it seems demanded some records to take away from the gigs.

The trio duly obliged by going into the studio to record their first album – ‘Morning Session’… named for the fact that the whole thing was recorded in just that – one morning session. However –without sounding niggardly, it’s more an EP than an LP. ‘Morning Session’ boasts just 7 tracks and clocks in at a tad over 20 minutes! Signor Dimonte says he wanted the album to have the feel of a live show… to capture the “mood”, as it were.

Still, if you’re an addict of bass-heavy funk and sparse loose jazz, you may want to check it out. Most memorable cut is the opener ‘Mama’s Walk’. It is ultra-heavy on the bass, so if you want something a little more melodic try the closer ‘Wooood part2’ (the “o” s are intentional) – a foil to the free from of ‘Wooood part 1’