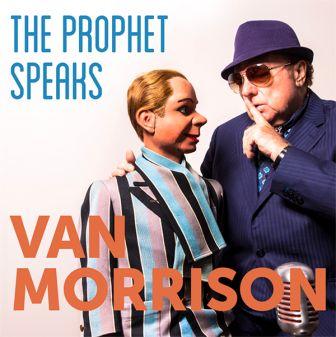 In something like two years, VAN MORRISON has released four albums…. ‘Keep Me Singing’, ‘Roll With The Punches’, ‘Versatile’ and ‘You’re Driving me Crazy’ – a collaboration with organ grinder Joey DeFrancesco.

Now we learn that Morrison is set to release a new long player in December. The album, ‘The Prophet Speaks’ once again features DeFrancesco and like their previous collaborative effort the 14 track set is a mixture of covers and Morrison originals.

The covers include tunes from Sam Cooke, Solomon Burke and Eddie Cleanhead Vinson. The most intriguing looks like being Van’s version of James Phelps’ 1965 Chess classic ‘Love Is Five Letter Word’.

Van says: “It was important for me to get back to recording new music as well as doing some of the blues material that has inspired me from the beginning. Writing songs and making music is what I do, and working with great musicians makes it all the more enjoyable.”

The intriguing cover by the way sees Van alongside legendary ventriloquist dummy Archie Andrews. Andrews and his operator Peter Brough were stars of 50s and early 60s variety and steam radio (a ventriloquist on the radio?) and it’s clear that Morrison (like many of us of the same vintage) was a fan!