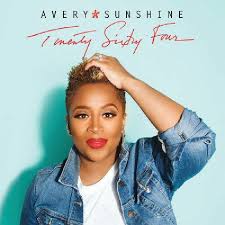 Don’t really know what’s going on here but last year we reviewed AVERY SUNSHINE’S quite excellent album’ Twenty Sixty Four’. It was May 2017 and we said then that it was a great collection: “an album for those quiet storm moments, celebrating empowerment, encouragement, empathy, enjoyment, entertainment and romance.” Well with little or no info and minus any kind of fanfare the self-same ‘Twenty Sixty Four’ has turned up again – reissued/re-released …. We don’t know. It is on a different label though – last year’s appearance was via Shanachie; this one’s on In And Out Records and it boasts four “new” tracks alongside the original 11.

So rather than re-review the album (see our review archive for that) let’s briefly mention the four new songs. Two – ‘Forever’s Not Long Enough’ and the lovely, lazy ‘Come Do Nothing At All’ suit the smoochy template of the original release; ‘No Time For Mess’ is sparse and funky while the fourth “newie” is a cover of Carol King’s ‘You’ve Got A Friend’ which is given a rather dramatic treatment.

There you go – a mystery. Sunshine completists (if such creatures exist) will need this but in truth the re-tread doesn’t add an awful lot to last year’s release.