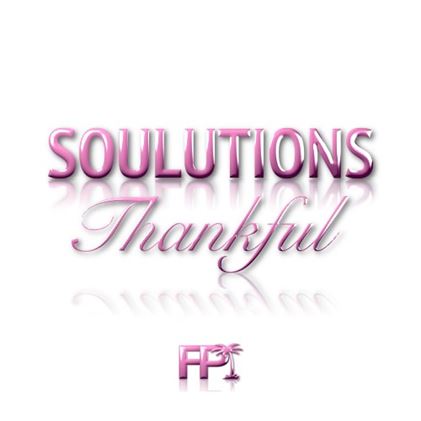 Newcastle duo SOULUTIONS (Steve Lee and Louise Mehan) have earned themselves a warm and affectionate place in the hearts of the UK soul cognoscenti. They burst upon us in 2014 with the still gorgeous ‘Listen’ and since then an album or two and a selection of tasty singles has left them near and dear in our soul affections.

We last heard new music from the terrific twosome last year with the single ‘Be Thankful’ which followed on from the delightful ‘I Got To Party’. We were told that both tunes were from an “upcoming” album, well that “upcoming” has now materialised into “released” as Soulutions launch the 13 tracker that is ‘Thankful’.

‘Be Thankful’ and ‘I Got To Party’ still sound top notch but there’s much, much more here to enjoy …. tunes like ‘Shooting Star’, ‘Thinking Of You’ , ‘Second Guessing’ and the heart-tugging ‘Hey There’ makes you wonder why Soulutions aren’t bigger than they are. That last one in particular (shades of Stevie’s ‘Lately’) is a masterpiece and confirms what I’ve long believed – that Radio 2 play-listers have cloth ears! This one should be all over the radio!

Sadly, I’m thinking, management problems, promotion issues and lack of a big budget have kept Soulutions from the mainstream. We survive in soul’s backwaters and if you’re swimming with us – this demands immediate investigation.