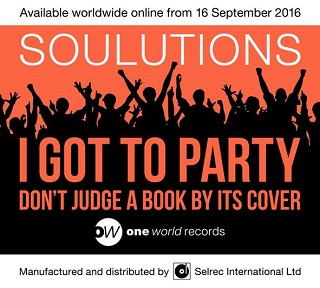 Newcastle duo SOULUTIONS (Steve Lee and Louise Mehan) took the UK soul world by storm back in 2014 with tunes like ‘Listen’ and ‘Philly Line’. For a time they were everywhere…. but after the ‘Destiny’ album (now just released in Japan) the momentum started to stutter.

Well, the good news is that Soulutions are back… and firing on all you know whats! Now working with Paul Mooney’s One World Records, Steve and Lou are releasing a new double A side on September 16th.

First up there’s the insistent ‘I Got To Party’. More a groove than a “song” (you know what I mean), it’s a gentle and sophisticated call to the floor and already causing massive interest after being rotated on Jazz FM. The other cut is ‘Don’t Judge A Book By The Cover’… a much more complex affair with a touch of the ethereal about it. Lovely lyrics too!

On both Louise proves what a wonderfully emotive vocalist she is while partner Steve proves he’s a master of the modern soul idiom.

We’re told that there will be remixes and a vinyl release too!